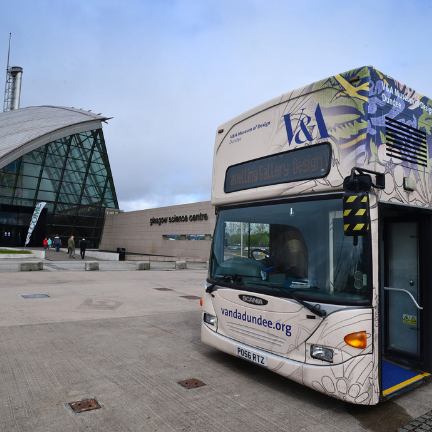 In late March 2015 Muckle Media was briefed to provide public relations support for V&A Dundee’s Design in Motion exhibition which would tour across more than 70 venues in Scotland.

Through media relations, partnership liaison and engagement, content creation and asset creation (e.g. photography), Muckle Media aimed to: encourage attendees to visit the exhibition engage with local communities across Scotland raise the profile of V&A Dundee prior to its opening in 2018 encourage downloads of the ‘Design Scotland’ app

Over the course of the contract and tour Muckle Media achieved the following results:

(May) 68 pieces of coverage in 58 unique publications

A total circulation of almost 3.2m, and as a result of increased awareness of Design in Motion, the exhibition achieved its target of over 10,000 visitors

Coverage appeared across Scotland in local, regional and national print publications and online and broadcast media; including the Campbeltown Courier, Inverness Courier, Stornoway Gazette, Lennox Herald, West Highland Free Press, Dumbarton Reporter, Berwickshire News, to Arbroath Today, across all of The Courier’s regional outlets, as well as the Paisley Daily Express, the Press & Journal and Edinburgh Evening News.
The Herald, The Scotsman, The National, BBC News online, The Skinny and The List online, Scottish Construction Now, BBC Alba, STV News at 6 (Edinburgh and Lothians), BBC Radio Scotland (Aberdeenshire and Highlands and Islands), Radio Tay and Moray Firth, Scotland on Sunday as well as UK based Design Week (online), Building Construction Design and View London, with online content at international design magazine Form (Germany).
STV Aberdeen, and The Courier (at Kirkcaldy & Montrose) both directly visited Design in Motion, the Lennox Herald at the Vale of Leven School, with  STV News crew at 6 (Edinburgh and Lothians), as well as photographers for The Scotsman and Evening News, attending at the Scottish Parliament closed visit for MSPs. BBC Alba attended Design in Motion in Stornoway with a report being broadcast.

Muckle Media helped to develop the partnership with VisitScotland and reached out to the Regional Directors to encourage them to visit Design in Motion. This resulted in VisitScotland Regional Directors visiting the roadshow in four iconic locations; Kirkcaldy, Montrose, Aberdeen and Inverness
In order to make the most of existing partnerships, Muckle Media arranged for filming to take place in Inverness with Alison Chisholm from the Travelling Gallery and Sarah Saunders, Head of Learning and Engagement at V&A Dundee. The resulting video content has been shared with Creative Scotland for use on their website and e-newsletter, as well as on V&A Dundee website and via its social media channels
In order to increase partner engagement, Muckle Media shared images of the Design in Motion exhibition with several key organisations and venues, including: National Trust for Scotland, Glasgow Science Centre, The Lighthouse, Crafttownscotland.org, Scottish Parliament and funders –  the People’s Postcode Lottery and the Scottish Government, to be shared via their social media channels.

Muckle Media has provided content for the Design in Motion blog and website, focusing on specific designers and those working across the exhibition