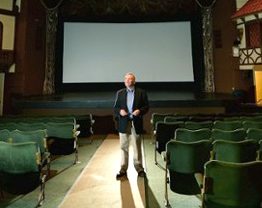 Challenge
Muckle Media was tasked with providing PR support for the centenary of Campbeltown Picture House – the oldest, continuously operating, fully functioning picture house in Scotland. Muckle Media aimed to provide a press and media campaign to maximise publicity and coverage of the event and to raise awareness of The Picture House – in turn helping to raise funds to revive the interior of the art deco building which survives on local support.

Strategy
Muckle Media compiled an extensive media list featuring national press and broadcast, specialised publications and local publications to secure maximum coverage. We drafted a press release for the centenary which was used to pitch to the extensive list of journalists and publications, with emphasis on the cultural importance and heritage of The Picture House.

Results
Campbeltown Picture House received a huge amount of coverage despite the short duration of the project. We also secured a letter from Buckingham Palace, expressing the interest The Queen had shown in The Picture House and congratulating it on its 100th birthday. The congratulatory letter from Buckingham Palace provided an interesting hook for journalists and was very popular with the attendees of the centenary celebrations.

A number of photographers and reporters visited The Picture House to cover the event. The centenary featured in various national and regional press, online, radio and TV.

Newspaper coverage included The Herald, The Scotsman, The Daily Telegraph, The Guardian, Sunday Mail, Sunday Express and the Campbeltown Courier.

Online coverage featured in Yahoo, The Guardian and BBC News.

The Centenary also featured on Radio Scotland’s Call Kaye programme and a report was broadcast by STV News.

Muckle Media was also shortlisted for a 2013 CIPR PRide award for its work with Campbeltown Picture House.